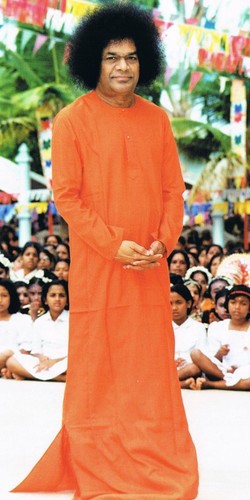 Who is Sri Sathya Sai Baba?

“I am God. And you too are God. The only difference between you and Me is that while I am aware of it, you are completely unaware.” This is the answer Bhagawan Sri Sathya Sai Baba gives to people who query Him about His identity and divinity. This fundamental truth of man’s divine nature is at the heart of His message and mission. Indeed, in His discourses to devotees, He addresses them as “Embodiments of the Divine Atma”. All who experience His pure and selfless love, and benefit from His illuminating counsel, and witness His miraculous nature get a glimpse of the glory and majesty of God, and therefore of what one potentially and inherently is.

Sri Sathya Sai Baba was born as Sathyanarayana Raju on November 23, 1926 in the village of Puttaparthi, in the state of Andhra Pradesh in South India. Even as a child, His spiritual inclination and contemplative nature set Him apart from other children of His age, and He was known as ‘Guru’ and “Brahmajnani’ (knower of Brahman or Godhead) among His peers and others in the village. However, it was not until October 20, 1940, the day He made the historic declaration of His Avatarhood, (Avatar – Divinity Incarnate) that the world at large learnt of this divine phenomenon. Today, millions of devotees from all over the world, professing various faiths, and hailing from various walks of life worship Him as an ‘Avatar’, and an incarnation of the Sai Baba of Shirdi. Thousands gather every day at Prasanthi Nilayam, His ashram established beside the village of Puttaparthi, for His Darshan, when He moves among devotees blessing them and providing spiritual succour and solace.

Revealing the purpose of His Advent, Sai Baba has said that He has come to re-establish the rhythm of righteousness in the world and repair the ancient highway to God, which over the years has systematically deteriorated. In His own words, “This Sai has come in order to achieve the supreme task of uniting the entire mankind as one family through the bond of brotherhood, of affirming and illuminating the Atmic Reality (Atma – The Self) of each being, to reveal the Divine which is the basis on which the entire cosmos rests, and of instructing all to recognise the common Divine Heritage that binds man to man, so that man can rid himself of the animal and rise up to the Divine, which is the goal.”

Bhagawan Sri Sathya Sai Baba is an integral manifestation who combines two very significant roles. Firstly, He is a great spiritual Master, famed for His simple and sweet exposition of the greatest and most intricate of spiritual truths which form the fundamental teachings of all the religions of the world. Elucidating on His mission, Bhagawan declares “I have come not to disturb or destroy any faith, but to confirm each in his own faith, so that the Christian becomes a better Christian, the Muslim a better Muslim and the Hindu a better Hindu.” His formula for man to lead a meaningful life is the five-fold path of Sathya (Truth), Dharma (Righteousness), Shanthi (Peace), Prema (Love) and Ahimsa (Non-Violence). Love for God, fear of sin and morality in society – these are His prescriptions for our ailing world.

Secondly, He is an inexhaustible reservoir of pure love. His numerous service projects, be it free hospitals, free schools and colleges, free drinking water supply or free housing projects, all stand testimony to His selfless love and compassion for the needy and less privileged. True to His declaration – “My Life is My Message”, He has inspired and continues to inspire millions of His devotees worldwide by His personal example to live the ideal that service to man is service to God. The Sri Sathya Sai Organization today has a presence in over 167 countries in the world and members undertake group service activities that benefit their immediate community.

Bhagawan Sri Sathya Sai Baba is thus a beacon of hope in a world that is desperately seeking an end to the unrest and sorrow prevalent today. His message of “Brotherhood of Man and the Fatherhood of God” is a spiritual salve that will lead mankind from the darkness of ignorance to the light of immortality. Indeed, very rarely does such a divine power walk the earth. As one devotee said, “Bhagawan Baba is nothing but Love walking on two feet”. Mankind must use this golden opportunity to follow in His footsteps. That is the way to its redemption and its salvation.

Who is an ‘Avatar’ and why does he incarnate?

Who is an Avatar?

An ‘Avatar’ is defined as an incarnation (physical manifestation) of the Supreme Being. The word ‘Avatar’ is derived from the Sanskrit word ‘Avataranam’ which means ‘descent’, and usually implies a deliberate descent of the Divine into the mortal realms to reveal the Absolute Truth to humanity and remind them of their true divine nature. Though Avatars may appear in different forms at different times, places and circumstances, yet they are all the manifestations of the One Supreme Lord.

Bhagawan Sri Sathya Sai Baba, the Avatar of the Age, has succinctly explained the meaning and the reason for the descent of the Avatar in the following Telugu verse:

He says that Formless God takes a form and descends upon the Earth as an expression of His boundless love and affection towards humanity. The Avatar is an enigmatic, yet delightful blend of individual consciousness and the Divine Consciousness. The Avatar behaves in a human way so that mankind can feel kinship with Him, but rises to His super-human heights so that mankind can aspire to reach those heights.

In Bhagavad-Gita, Lord Sri Krishna, the Avatar of the Dwapara Age, declares thus:

Whenever there is a decline of Righteousness and rise of evil, the Lord incarnates from time to time to uphold Righteousness, to protect the Virtuous and to uproot the evil.

The Avatar appears whenever the world is passing through a spiritual and moral crisis. The Avatar comes in order to uphold Dharma (Righteousness) and raise the universal consciousness.

Why does he incarnate?

One may ask – why should the Lord Himself incarnate? Why should He not set about the task of restoring Dharma through the many minor gods and angels that He has at His command? The Mughal Emperor Akbar once posed the same question before the courtiers, for he scoffed at the Hindu idea of the Formless adopting a Form and descending into the world as an Avatar to save Dharma. Birbal (the celebrated courtier in Akbar’s court, known for his wit and wisdom) asked for a week’s time to answer the question. A few days later, when he was in the pleasure boat of the emperor, sailing across the lake with his family, Birbal threw overboard a doll made to look like the emperor’s little son, crying at the same time, “O, the prince has fallen into the water!” Hearing this, immediately the emperor jumped into the lake to rescue his son. Birbal then disclosed that it was only a doll and that the prince was safe. He allayed the anger of Akbar by explaining that he had to perforce enact this drama in order to demonstrate the truth of the Hindu belief that God takes human form to save Dharma without commissioning some other entity to carry out that task. Akbar could have ordered one among the many personnel he had on board to jump in and rescue his son. But his affection was so great and the urgency so acute that the emperor himself plunged into the lake to save his son from drowning. The decline in Dharma is so acute a tragedy and the intensity of affection that the Lord has for good men is so great that He Himself comes to the rescue.

The Divine mysteries cannot be fathomed by the human mind, unless God himself chooses to unlock them out of His immense love and compassion. Bhagawan Sri Sathya Sai Baba, in a landmark discourse on 6th July, 1963, the Guru Poornima Day, declared the secret behind His advent. He revealed that the Sai Avatar is a triple incarnation of the Shiva-Shakthi Principle – Shiva as Shirdi Sai Baba, Shiva and Parvathi embodied as Sri Sathya Sai Baba and the Shakthi Principle that will incarnate as Prema Sai in the Mandya District of the state of Karnataka. Click here for the complete text of the Guru Poornima Discourse of 6th July 1963.

Even in His childhood days, Swami used to refer to ‘The Saint of Shirdi’ in the songs that He taught His companions. Very few in that region had ever seen or heard about Shirdi or Sai Baba. Little did they realize that the child in their midst, singing and dancing so captivatingly would, in a few years, make their village another Shirdi to which hundreds and thousands would come seeking the same Baba!

Sai Baba of Shirdi was born in a remote village called Pathri in Maharashtra on September 28, 1835 to the couple, Gangabhavadiya and Devagiriamma. Gangabhavadiya, overcome with a feeling of intense renunciation immediately after the child’s birth, decided to retire into a forest. With Devagiriamma religiously following her husband, the newborn was left in nature’s care. A pious Muslim and his wife took care of the abandoned child till He was four years of age. Then they handed Him over to a spiritual master by name Gopalrao Deshmukh (also known as Venkusa). For 12 years, till 1851, Baba stayed in Sri Venkusa’s ashram. One night in 1851, for the first time, Baba came to Shirdi. However, He left after a two month stay. He returned to Shirdi again in 1858 and stayed there for 60 long years. Just prior to His shedding the mortal coil in 1918, Shirdi Baba told some of His devotees that He would reappear in the Madras Presidency in 8 years time. Sri Sathya Sai Baba, born in 1926, declared that He was Shirdi Baba come again.

Sathya Sai Baba invariably refers to Shirdi Baba as ‘my previous body’ whenever He speaks about Him. He often describes to His devotees, how He in His previous body dealt with people and situations, what illustrations He gave to clarify certain points, what questions were asked, etc. Many devotees of Shirdi Baba have had experiences confirming the unity of the two Sais. Click here to read some of these instances